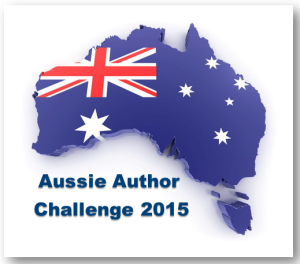 Just a Queen by Jane Caro is my  third  title counting towards the  2015 Aussie Author Challenge hosted by Jo at Booklover Book Reviews.

It ticks the boxes as a female author, fiction published 2014-2015 and an author I haven’t read before.

Just a Queen is the sequel to Just a Girl. It continues the story of Elizabeth, now Queen Elizabeth I.

First, a confession. I haven’t read Just a Girl. I was too engaged to turn back when I realised I was reading a sequel and I didn’t want to. For the record, reverse reading didn’t have any negative impact on my enjoyment and Just a Girl is now on my TBR list.

Just a Queen is wonderful authentic historical fiction. Elizabeth’s voice is perfectly wrought. The language and dialogue, while never archaic, is cleverly placed in time by the choice of words.

This is an introspective story and much of the action takes place inside Elizabeth’s castle although she is continually receiving messages of daring deeds and overseas news, and enjoys the occasional progression through the countryside to meet her people.

Despite her royal role, Elizabeth is in many ways, not very worldly. She has purposely excluded love and motherhood and has no living immediate family. She is surrounded by male advisors who even when she can trust them, make unnecessary allowance for her gender.

It’s no surprise Elizabeth is preoccupied with her cousin, Mary Queen of Scots. Mary was a young queen too, her peer, and Elizabeth has long daydreamed that they might become friends and confidantes.

Mary’s life is very different. Exiled from her throne, multiple marriages, a son and a reputation for scandal. But that’s not what places a wedge between a possible friendship. Mary is Elizabeth’s rival. The Catholic Church would rather see Mary rule England and Mary’s son is heir to childless Elizabeth’s throne.

Elizabeth is a good ruler, despite the obstacles she faces – whether it’s parliament or being a single, childless woman. Ultimately however, she has no control over the decisions her situation dictates, just as she had no control over the unexpected events that brought her to the throne.

The hardest decision of all is what to do with Mary, now imprisoned in England.

Jane Caro portrays Elizabeth I not only as a significant historical figure, but a real, accessible person. Strong and vulnerable. One who rules an Empire but struggles to decide between heart and head, right and wrong, individual and state.

Some readers may prefer more action and drama but I enthusiastically recommend Just a Queen to readers of all ages who love historical fiction.