Writing in My Un-Comfort Zone

I do it all the time. Put my hand up. Volunteer faster than the speed of light. I think with my heart and then my head gives me a talking to afterwards. But usually it works out. Like running a Writing Your Family History Workshop for Seniors Week. 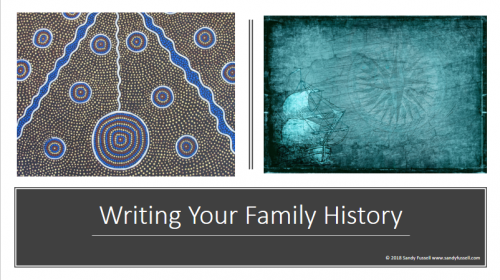 Surely I could do that? I’m a writer. I’ve got a copy of Hazel Edwards most excellent How to Write  A Non-Boring Family History and I’ve been lucky enough to benefit from Hazel’s personal tips over the years. Plus, I’m writing my own family history. A Writing Your Family History Workshop. Yes, easy-peasy, I could do that with my eyes closed.

Two weeks prior to the date, I sat down to create the PowerPoint. Whoa! Such a lot of work. Finding examples from my own family history that fit the points I want to make. Creating a exercises from scratch. Introducing some Internet secret weapons – History Pin for research and Sutori for timelines.  But the real problem is the whole process is so, so distracting. Two hours later I’ve done two more hours of my own genealogy research and not a single PowerPoint slide.

Eventually it all came together. I believe it will and therefore, it always does. Works so far!

The workshop was such a lot of fun. Three hours with a group of people as keen on genealogy as me. All eager to learn how to write it down so that other family members would be enticed to read it. Eager to learn how to spin a story around even the most boring ancestor. 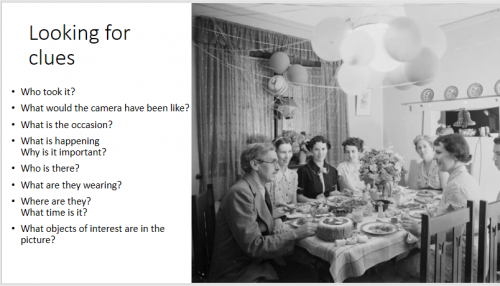 I think its important to write family history into a story. In my family, no-one else cares about their history, but everyone loves a story and maybe some day, a distant descendant will read what I write and take up the research baton. On my journey I’ve been the recipient of many treasures no-one else wanted. To be told by distant relatives holding a piece of the puzzle, “we’ve been waiting for someone from your part of the family to get touch, but up until now, no-one came,” is like finding an Easter egg in a computer game. 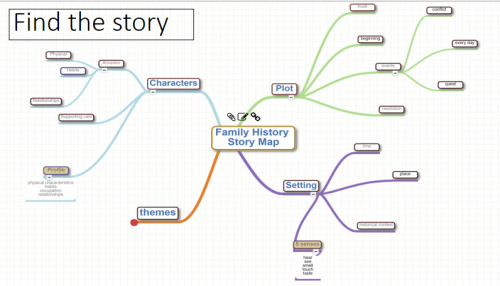 I don’t have any famous relatives. My most famous ancestor came out on the Third Fleet and at one time owned half of The Rocks in Sydney but the direct line of descent that I was destined to join never contained anyone who did anything of note. The other line had poets, a famous explorer and even a prime minister’s wife.

“If you don’t recount your family history, it will be lost. Honor your own stories and tell them too. The tales may not seem very important, but they are what binds families and makes each of us who we are.” – Madeleine L’Engle

I do have two missing relatives for whom no record can be found. Their stories are shrouded by rumour and intrigue. Aunty Anne swears it was murder most foul and an Earl’s youngest son betrayed by his convict wife. But I don’t want to make their stories up so despite all the promise, it’s a dead end, even if it does end in a cliffhanger question mark.

My great-grandmother accidentally started me on this quest. When I was 20, and had moved to the big city, my sister sent me a news clipping. My great-grandmothers’s 100th great-grandchild had been born. That was a huge shock. As a child I lived nearby and visited often. My father had a special relationship with her. He had lived with her in his youth when the Burragorang Valley was flooded and his family went west but he stayed behind. I always knew I was one of many but not that many! I had always felt special – like I was one of a lucky few – not one of over a 100 people with exactly the same relationship to her. (And when I told this story to some of her other great-grandchildren – they said theyf elt the same way. She was the one who was special). 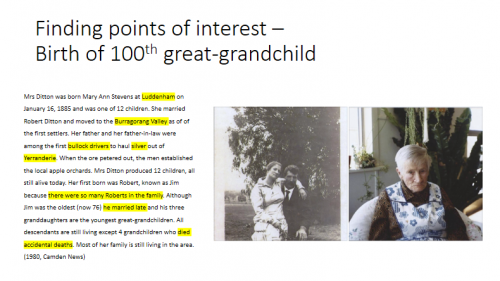 At the time of the news clipping, Grandma Ditton  had 161 descendants and they were all alive except four who had died in accidents. Not one had died of natural causes. (How did that happen? War has a way of juggling the timelines. The eldest sons went to war, came back and married last.) It was almost an Australian record for having the most descendants. The record was then held by a man whose name I’ve forgotten. But then again, he had two wives. He ought to have been disqualified!

I have to stop here. I’m getting distracted again and for the moment I’ve got a different book to write.

An hour after I finished writing this…

My sister rang. Her family and my father live 5 hours away in a place where the Internet barely reaches, where there are currently more kangaroos than people and where life is always a lot of hard work. “Dad is asking a pile of questions about the family history, ” she said. “Have you got anything I can give him to read?” Have I ever! And I’ve got some questions for him, too.

I thought it was one of my descendants who would want to read my family history story. Turns out it will be climbing up the family tree, not down.

October Roundup: From Russ the Bus to Pokemon Go